Home » Adaptations for back and neck
Nederlands | English

By sleeping this way, my back and neck are stretched out a little while I sleep.

This was created out of necessity. When I lie down, the torsion of my back is passed on to my neck. So even when I sleep my vertebra in my neck are pushed in a skewed way. I have tried other ways, but it appeared that by using gravity was better than some kind of force to stretch out my back and neck.

A number of years later I made it less tilted and added a support for my lower legs: 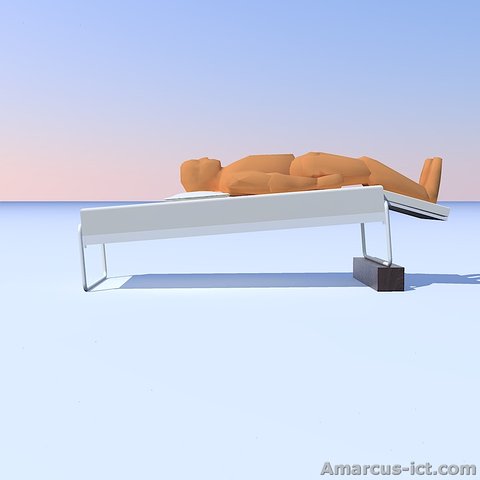 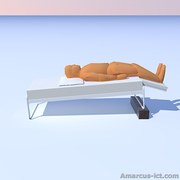 These 3D illustrations are made by Amarcus ICT and are Public Domain.

I am less tired by sleeping this way. I think it could be that for example my neck vertebra are more loosely apart so they put less pressure on things in my neck that run to my brains. Another possibility is that there is less pressure on the spinal cord in my neck, so that I have enough strength to breathe properly. And I suppose that because my neck vertebra are more loosely apart, that the blood vessels to and from my brains have a bit more space and therefore my brains could have more oxygen during sleeping.

I had the most to gain from my tilted bed, after sleeping this way one and a half year.

I need less pain medication. I don't have to take painkillers daily.

By lying this way it was possible to write all kind of letters, and I am still able to travel to the insurance-doctors and the court.
I was able to create the biggest part of my site, by lying on my tilted bed for most of the day.

If I lie down directly after a meal, it is not pleasant for my stomach. Also sometimes air gets trapped in my stomach.

If I lie this way, there is always pressure on the major blood vein in my belly (abdominal aorta). And the blood circulation of my legs is less, because they hang down to prevent me from sliding down the bed.

My tilted bed turned out to cause some more minor inconveniences. Such a some small incipient varicose veins in the back of my knee.
Also a somewhat thickened nasal mucosa was probably caused by my tilted bed. That was adversely for my breathing, since my breathing is less with more mechanical pressure on my neck. So I tried to fix that, see my page on more oxygen.

The results through the years

In 1997 my neck problems and muscle tension increased so much that my health decreased every week. I tried several things. Eventually, making a declined bed did help.
My bed was 10.6 degrees tilted.

In 2002 I slept 5 years on my tilted bed.
My neck and back are stretched by gravity, but my shoulders are pulled down by gravity as well (towards my head). The muscles of my neck to my shoulders become shorter, which is bad for my neck. This become after 5 years a growing problem.

After 6 years I got more problems. One of them was pain around the knee and have painful knees (it might have to do something with: blood vessels, tendons, knee joint). The pain increased, so I could not lie tilted for long. The problem is that if the pain increases, I can not relax very well.
Because I could not lie on my tilted bed so much, the result is an increases of my neck problems in 2008, so I am often too dull and miserable to be doing something serious.

After 7 years I had to make the bed less tilted. I reduced it from 10° to 4°. And I added a slanted board with a top of memory foam to support my lower legs.
I lie on my tilted bed for about 1 or 2 hours a day. And this still helps to reduce my neck problems.

Because of my increasing neck problems, I lay in 2013 more in my tilted bed, about 2 to 3 hours a day. That caused also an increase of the disadvantages.
Together with my foot mouse I sometimes got cramps in my legs, but I was able to reduce that.

Because of the disadvantages, I could almost not use my tilted bed. I tried to make it less tilted by raising one end (the end where my feet are) with only 5 cm, but that did not have a stretching effect on my neck. With 10 cm it did have some stretching effect. The angle is 2.7 degrees with the 10 cm. I used my tilted bed about twice a week for one hour.
On 9 July 2015 I asked a question (link in Dutch) about the disadvantages of my tilted bed to my general practitioner. But that was not very successful.

In 2017 NASA did a test in Germany. The test subjects had to stay in a tilted bed all the time with head-down for 30 days. The bed was 6% tilted (declined).
NASA could have contacted me, because the 30 days is only a short time.
They did a similar test in 2019, but then for 60 days.

After all these years I can say this about it:

It is possible to sleep at night (and also a few hours during daytime) on a tilted bed head-down.
With the bed elevated by 10 cm at the feet, the bed is declined by 2.7 degrees.
That is the minimal angle at which I still notice a stretching effect for my neck. The disadvantages are limited with such a small angle.
It is not possible to do that continuously for many years. When there are each day a number of hours to walk and sit in a chair, then it is possible to use the declined bed for years. However, not for seven years on a bed with too much tilting, as I did.
It is only possible when someone is otherwise healthy, and not with a full stomach, and it causes permanent damage to one's health.

I had two metal bed frames that were made longer and the steel spirals were covered with slats, because the steel spirals billowed wrongly for my back and neck. Those extended bed frames were clumsy.
In 2019, I replaced those bed frames with plastic pallets of 80x120cm, weighing 8kg each. With three on top of each other and two after each other I had a bed that was 80 cm wide. That is narrow. By placing a perforated plate or very sturdy foam of 90 cm wide, I was able to make the top 90 cm wide.
The pallets were used pallets and costs only 4.80 euros each, but the shipping costs were 66 euros.

To be able to make a tilted bed again with that bed of pallets, I bought a slant shape of polyether foam: 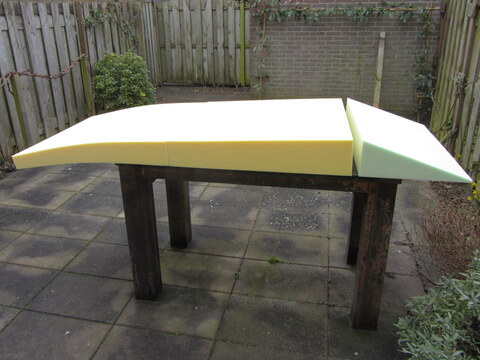 My knees come where the separation between the two parts is.

Tilted bed the other way around

If I had a pillow in the shape of a spoon that would be a exact fit for my head, then I could use my tilted bed the other way round with my head on the high side.
That way my neck would also be slightly stretched. Since my bed is only 2.7 degrees tilted, it seemed safe enough.
By trying to make a supporting collar, I had worked with oogoo. Below is a photo of the "pillow" that fits my head exactly. I made it in 2019.
The lower white part is made of ordinary silicone with corn starch. I made a paste of the corn starch with oderless white spirit. That was necessary to work with such a large amount of oogoo. I mixed it well, but it took months before the smell disappeared.
The blue upper layer is non-toxic silicone that I applied with a brush. The holes are for attaching the pillow to my bed. 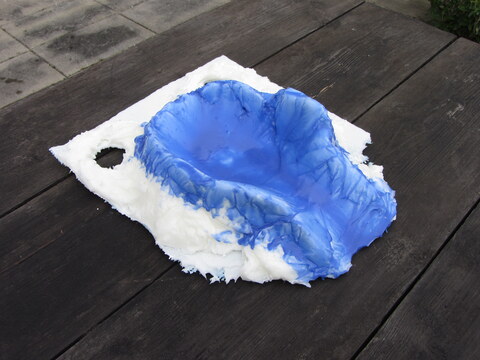 Because I had used white spirit, the form started to shrink. The oogoo was also too stiff. It was not pleasant, but it worked. I intend to make a better shape from other material.


Home » Adaptations for back and neck
Last change to this page: August 2020