Home » Adaptations for back and neck
Nederlands | English

For many years I had the idea to keep my back and neck in motion during sleeping.
Because I only can lie on my back due to my neck problems, I lie too motionless during sleeping. So I wanted a mattress with active motion.
I talked about it with others and I even placed an advertisement in a local newspaper to ask others for help.
In the end, that didn't lead to any result.

So I decided to make something myself.
I took me a lot of effort, and I often wandered if it would ever pay off. But only after a week with a first test, it turned out to have a positive effect.

A mechanical construction would become complicated. With air pockets and air pressure it would be easier and that is also safe.
During making my mattress with motion, I didn't know what the final result would look like. I thought that I would need somewhere between 2 to 40 air pockets, and I want to able to program each air pocket individually when they would inflate or deflate.

I tested a few pumps and a few solenoid valves. For my tests I used a flow meter, and a pressure sensor.

To measure the air flow of the pumps, I needed a air flow meter. I used the "balloon-in-the-bucket" flow meter.
I put an empty balloon in a bucket, en let the air flow inflate the balloon. As soon as the balloon is stuck in the bucket, I stop the stopwatch. The time to fill the balloon can be converted in liters per minute. The back pressure of the balloon was not that much (40 mbar). 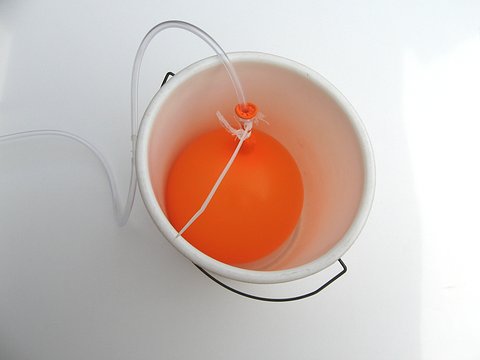 My measurements with the "balloon-in-the-bucket" method turned out to be not reliable.
So later I used an air compartment of non-elastic material (PVC). I first immersed it in water, to determine the contents. It turned out to be 2.4 liter. From then on, I just measured the time until is was completely filled. That greatly improved my measurements.

There are also air flow meters, which are used in cars. They are quite expensive, but also used ones are available. I didn't buy one, because measuring the air flow was not that important anyway.

To measure the pressure, I would need a pressure meter that is able to measure both positive pressure and negative pressure (vacuum). The MPXH6400A sensor could do that. It works at 5V and measures the absolute pressure. It is therefor also a barometer. The output is an analog signal. It can measure from -0.8 bar to 3 bar.

After some tests I found out that some aquarium pumps almost supply enough pressure.
I choose a good aquarium pump, those are mechanical and electrical of much better quality than the cheap ones.

To get more pressure, I used two aquarium pumps to double the pressure.

Good aquarium pumps are silent and they last for many years. That is exactly what I needed.
Some aquarium pumps were able to deliver 0.2 bar pressure. By cascading them I had 0.4 bar pressure, which turned out to be well enough.
To cascade two pumps, I had to make an air inlet in the pumps. I made the inlet in the case, and I sealed the case with sealant.
Because I made an inlet, I now have to use a air filter to keep the pumps clean.


Because I used my mattress with layers, I could place the air pockets between the layers of my mattress.
I used bicycle inner tubes as air pockets. 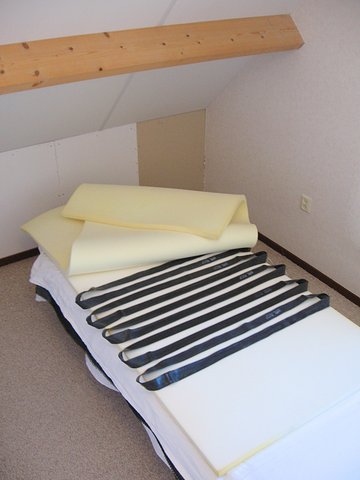 The rubber of the bicycle inner tubes is actually too thick, and this influences the mattress. Something better for the air pockets is hard to find.

I was able to buy used solenoid valves which were ideal for the low pressure and low airflow that I use. 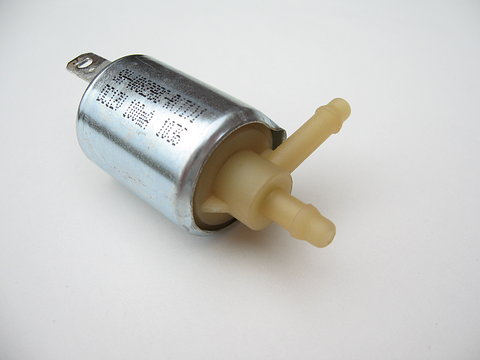 Fourteen valves fitted in the box that I bought for the control unit. 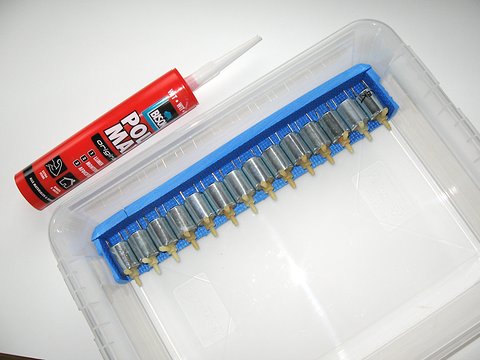 The box was marked on the bottom as "PP-05". This means that it is made from polypropylene. If I would drill holes in, it would crack and break. So I made a drill bit hot over a flame and used it to make holes for the connectors for the tubes.

Perhaps less valves is possible, but to me it seems better not to let an reverse airflow go through the air filter.

This is how the valves are connected (click on the image for a larger version):
The plus-sign indicates the side of the valves that can withstand pressure. 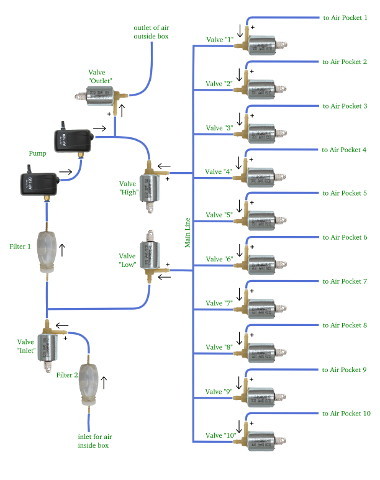 To control everything, I needed something that I could program.
The best choice is an AVR micro-controller, since there are many examples on the internet and many people are willing to help.
The Arduino is meant for such things, but both the hardware and software was too complicated for me.

When I had finished the mattress with motion, I did understood the Arduino. I used that knowledge for my footswitches with the Arduino Leonardo.

The Raspberry Pi was not available by then.

It was my job to write software to be used in devices. But due to my neck problems it took me a lot more effort to do such things. What I used to do in one day, takes me more than a week (and only if I was fit enough for it).

Therefor I started with a ATtiny13 microprocessor. Eventually I was able to make a blinking led with it. From that point I could go on.

The control unit has to be as simple as possible to make. I came up with the next design (click on the image for a larger version): 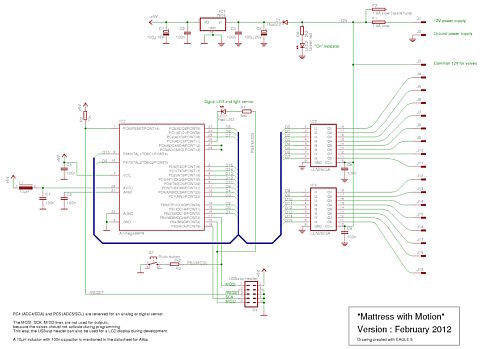 I choose these parts:

The ATmega88 is a newer version of the ATmega8. It's got enough pins to control my 14 valves. It has 8kbyte memory, which should be well enough.
I used a ATmega88PA, which has an internal temperature sensor.
• ULN2803A

To control the valves, I could use transistors (for example BC639) or "logic level" MOSFETs. The ULN2803A however, makes things a lot easier. The valves are 100mA, which is well within the specifications of the ULN2803A.
No extra components are needed to keep the valves off during power-up.

The 5V voltage regulator is without cooling, because only little current is used.

A LED can be used as a light sensor. That's why the LED (with a resistor) is between two pins of the ATmega88.

To program it, I use a USBasp connection. A USBasp programmer costs only 3 euros.


As shown in the schematic, there are two types of ground. That is because I want to have the possibility to connect an analog sensor, and I don't want the current through the valves to influence the analog section. Therefore I separated the grounds. They are connected at the 7805 voltage regulator.

This is such a USBasp programmer: 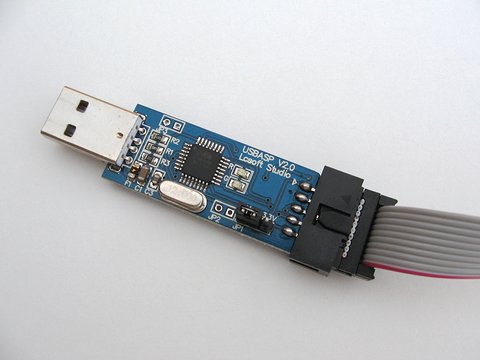 I did not manage to create a PCB design with a program. So I soldered everything with wires.

I had to do small steps over a few weeks of time to be able to finish it.
If I ever want more air pockets, then I will have to let a PCB be made for me.

Below is the source code ("mattress.c"):


This is the script to compile, link and programming the firmware into the avr chip ("go.sh"):

The sequence for the air compartments to inflate and deflate is now programmable.
Perhaps I will make a number of sequences, and perhaps I will change between them. Maybe a random sequence is also something to try.
By using my trolley-computer I can program the sequence while I am lying in bed, and I can try it right away.

In 2012 I made already some changes.
I tried a number of different air compartments, but they were not strong enough. So eventually I used ten bicycle tires. The program was changed to run the sequence faster, because with ten bicycle tires a cycle lasted too long.
I added a pressure sensor, so the bike tires were inflated and deflated to a certain pressure. I placed the pressure sensor in the "Main Line", that is the central point where all the valves to the air compartments are connected.
The air pumps made only little noise but they did vibrate, that made the cover of the box in which it was to vibrate and making noise. So I replaced the air pumps with 12V air pumps. Those could build up sufficient pressure (700 mbar), but gave too little air. So I used two of them parallel.

The two air pumps didn't have a connection for an air inlet. Therefore I placed the air pumps in a box, and an opening in the box would be the air inlet. I could not find a plastic box with the right dimensions, therefore I made a box of foam rubber (EVA foam) and I used ms-polymer sealant/kit to seal it. When the air pumps empty an air compartment with (a slight) vacuum, the walls are of that box are pulled hollow. But it seems to be going well and after a year it still works. 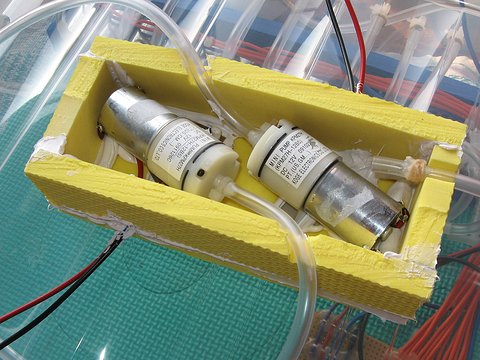 In 2013, the majority still worked well, but the air pumps were not able to build up a lot of pressure and the valves leaked. That was not a problem yet. I use only 130 mbar for a fully inflated air compartment and a pressure of -25 mbar to detect that it is empty.

In 2014 a number of bicycle inner tubes turned out to be leaking (on the side of the mattress, where the tube is folded). Also one valve was leaking too much to be used anymore. So I closed that valve, and now only nine bicycle inner tubes could be used.

To make it easier to make changes, I made it Arduino compatible. I had to make some adaptions to the circuit board, and I had to translate the code to Arduino code.

This is the new schematic (click on the picture for a larger schematic): 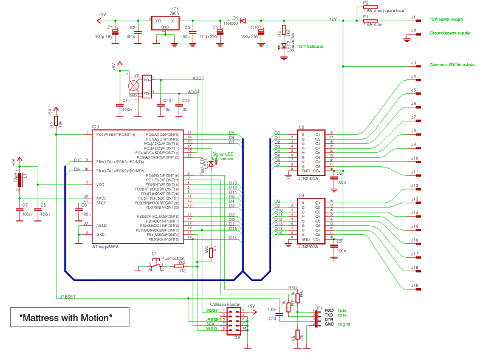 The ATmega88PA is not fully Arduino compatible, but most should work.
The ATmega88P has the same chip signature, but I choose to do everything special for the ATmega88PA.

First I needed a bootloader, I used Optiboot 5.0a.
The file optiboot.c was extended by adding the ATmega88PA to this line:


Luckely, they workt the second time I tried it.

The file "boards.txt" got this addition:


And the file avrdude.conf needed this:


Because I use the pins for the crystal as normal digital output pins, it was not Arduino compatible. So I used extra functions for that. Those functions are in the file "PinsExtra.ino".
Below are the six files.

In 2018, my mattress with motion did not reduce my back pain as good as before. It turned out that one of the two pumps stopped working. The box that I made for the motor, made of EVA foam and ms-polymer sealant, was still air tight after years of usage.

Since a few years, I use better quality bicycle inner tubes. They last longer, but these tubes contain talcum powder which gets into the valves. That makes the valves work less good.

To compensate for the less effective valves, I bought a stronger air pump. A ULN2803A still had an unused output, which I used parallel with the output of the pump so that the stronger pump could be controlled.
After that my mattress with motion worked a lot better, but still not as good as in the beginning.

I didn't have time to make a better version, because I was busy trying to make a neck brace with head support.


Rights: The movie about my "Mattress with Motion"
and the photos and drawings and software code
on this page are made by myself
and are Public Domain, unless otherwise noted.
Home » Adaptations for back and neck
Last change to this page: December 2018